This is incredibly common in academic writing, where it’s believe it’s driven by fear. “Impostor syndrome” is often mentioned in relation to grad students and academics; using the most complex language you can muster is just one more way to prove that you belong.

How can you decide whether your writing is clear or whether it is simple? I should probably just distinguish exactly what I mean here. Clear writing is writing that is easy to understand. Not childish, and not over complicated. It is appropriate for the context, content, and audience. Simple writing is too simple. That sounds reductive, but what I mean is that it has none of the situational awareness of clear writing, the very property that makes clear writing so good, and so difficult to produce.

The problem with the lack of clarity in writing lies in people worrying that someone will mistake their clear writing for simple writing. Or maybe even think that they are simple. The only way to avoid this is to forge ahead. Write clearly, don’t overcomplicate things, and ignore anyone who tries to criticise the direct nature of your words.

Tyler Reinhard’s system for dealing with notes is perfect. It’s well thought out, and well documented. Reading through the post inspired me to try and improve my notetaking, and more importantly, my note processing.

I think the key part of Tyler’s system here is making sure that any notes in your “inbox” are named with two leading spaces, for example:

Having notes named like this makes it very easy to sort by name in nvALT and see all the notes you still need to process. The filename-based scheme works really well with Drafts, especially since they added variable support to file names in a recent update.

To send items from Drafts to my notes inbox, I created the following action: 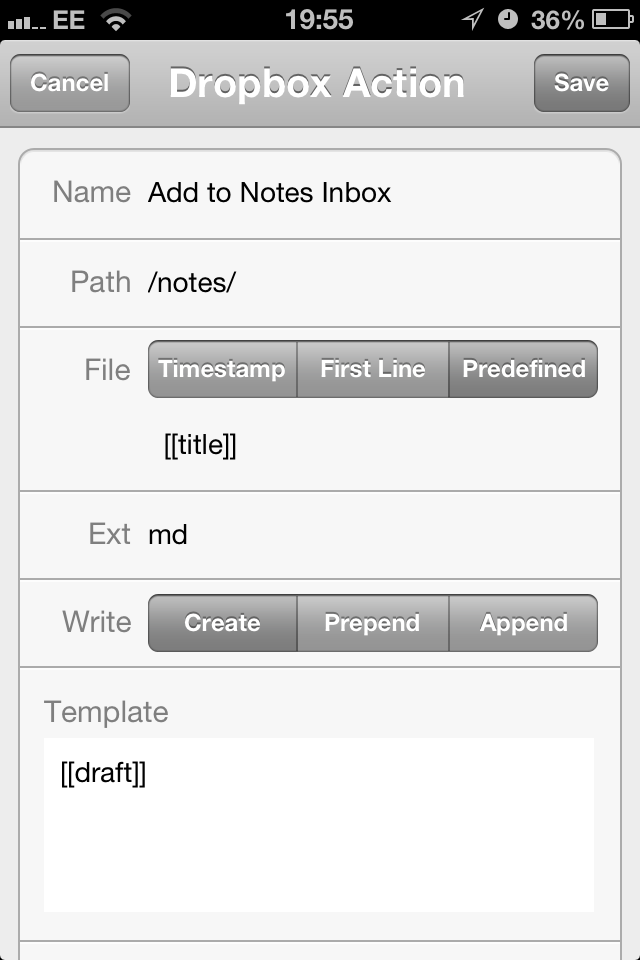 Using the “Predefined” file option, in combination with the [[title]] variable means that the note will be named correctly, and then saved to my ~/Dropbox/notes folder. It will then show up in the right place, and hopefully get processed.

How to master your life ⇒

Being successful at The Sims is very easy. It’s just like real life, except without a barrier between what you decide and what you do.

This post from Oliver Emberton really struck a chord with me. As someone who often takes a long time trying to make the perfect decision, the ideas here, although presented in a quirky way, could really make a difference.

Jumping to the Finder Location in Terminal ⇒

Combine the speed and Unix power of the shell with the convenience and added functionality of Finder!

This a great little bash function from Brett Terpstra to cd into whatever directory is currently open in Finder. This is perfect for coding where you want to visually explore the project structure before jumping in and making some changes.

What’s the first thing you do when you start a new project that will have a significant analogue component? If you said—“Grab a new notebook!”—then you’re not alone. This need to start a new notebook for every project is fuelled by the desire for organisation. Compared to digital documents, which can be easily copied, aliased, moved, filed, or trashed, going back to paper seems like a giant leap backwards. When you write something in a notebook, that’s it. So you sure as hell better stick it in the right notebook.

This organisational paralysis is completely unecessary, since wherever you write your mind maps, outlines, or doodles, you will be able to liberate them. But knowing that doesn’t really help. We are spoilt by the ubiquity of search for digital information. If the piece of information exists, whether it’s on the internet or your hard drive, you will be able to find it. How can you search a notebook? You could try writing the start and end dates on each notebook. It’s fairly easy to remember the rough period of time you had the idea, so you should be able to find it again if necessary.

Instead of buying more notebooks, I’m going to use the ones I’ve got, cramming them with as much information as I possibly can. And when I run out, I’m going to buy a plain pad of paper. Pads of paper are cheaper and more functional than notebooks. You can stockpile them for volume discounts; but resist the urge to keep starting a new pad for each project. Overpriced notebooks may be alluring, but they don’t make organisation easy. If you have a simple pad of paper (or even better, one with perforated sheets) you can just tear anything useful out and file it somewhere more permanent. Don’t panic if you want to tear something out and not do anything with it. I know that, although minimalism (especially in terms of possesions) has taken hold, getting rid of ideas is hard; it doesn’t need to be. You can treat each sheet of paper like an inbox item, and do it, delegate it, defer it, or delete it!

Jordan Webber takes a look at the taboo of playing games on easy. There are some interesting productive aspects to this - is it worth playing a game on hard just to say you did?

Ideas, and more specifically capturing ideas, is something that I struggle with. I don’t know if it’s because I’m worried that I don’t know where to put them, but I always seem to feel a sense of dread when I have an idea. It makes its way into my inbox, and then I’m paralysed. Admitting that this idea can be realised. Picking a next action. The correlation between concrete steps and seeing the idea birthed. It can be too much. So it sits there for a while, only to become a half-baked “look into” type task.

That’s not how things get done. While projects are driven by next actions, you’ll never bring down a monster if you spend all day swatting flies. Projects are driven by passion - whether you know it or not. If you are passionate about a project then it will get done. I don’t mean passion as in something all consuming and highly romanticised. It can be short-lived. A fleeting five minutes spent engrossed in a Wikipedia article. Often, it turns into an hour or more solving some problem that cropped up whilst you were working. This kind of passion, and the relentless need to get some specific thing done, can often snowball.

As I sat down and reworked this site for the third time in two years, I was turning to the project after letting it sit dormant for a few months. Originally, I wanted to create some kind of dynamic landing page, a big advert for everything I do online. I have no idea why I was pretending that’s what I wanted my website to be. I just want somewhere to write. If I’m recognised on the Internet, I want it to be for my writing.

The rework turned out better than expected, and ended up being completed far sooner than I anticipated. Once I thought about why I wanted to change the aesthetics of my site, I realised it was not the aesthetics that I wanted to change. It was the purpose. This clarity drove me towards cleaning up the design, giving myself permission to change without the baggage of the old posts I would rather forget.

Discovering this purpose turned the project into a passion. Other things were left by the wayside as I pressed ahead with getting this finished. I’m glad I did. Finishing something big is better than finishing one hundred tiny things.

Let your passion snowball, driving you to complete bigger projects in great leaps, not tiny steps.